With lots of high rise buildings offering great views of the city and plenty of busy foot traffic, the Portland’s City Center is a hip, trendy, and very livable neighborhood. The downtown neighborhood is located in central Portland with urban living spaces, tons of shopping, a booming business community, parks, and pretty much any amenity you could want in a neighborhood.

The eastern area of the Northwest District neighborhood is referred to as the Historic Alphabet district due to the streets between NW 21st and 23rd Avenue that are in alphabetical order, making it easier to find your way around the neighborhood.

With lots of high rise buildings offering great views of the city and plenty of busy foot traffic, the Downtown Portland neighborhood that use to be desolotate after 6pm is now a hip, trendy, and very livable neighborhood. The downtown neighborhood is located in central Portland with urban living spaces, tons of shopping, a booming business community, parks, and pretty much any amenity you could want in a neighborhood.

The population in the neighborhood is roughly 10,000 and less than 3% of the population is under the age of 17, so this isn’t a very family friendly neighborhood like most other areas in Portland. Most downtown Portland residents are single professionals or college students who live alone or with only one other person, in fact 77% of neighborhood residents have a one-person household. College students in the neighborhood most likely attend Portland State University, which is located right in the downtown neighborhood and is Oregon’s only urban university.
There are three parks in the downtown neighborhood: the South Block Parks which span 12 blocks in the southern area of downtown and through the middle of Portland State University, the North Block Parks which span 7 blocks in the northern area of downtown, and the Tom McCall Waterfront Park which spans 29 acres of waterfront along the Willamette river. These parks offer plenty of outdoor activities for the neighborhood including playgrounds, bocce court, basketball court, paved walkways and paths, and a large collection of beautiful sculptures to admire.

Neighborhoods that border Downtown Portland include Corbett Terwilliger Lair and South Waterfront to the southeast, Goose Hollow and Arlington Heights to the west, Southwest Hills to the southwest, Pearl District to the north, and the Willamette River is directly to the east. The Downtown Portland neighborhood spans a mere 637 acres, so all of these bordering areas are very close by and most are considered in the downtown area even though they’re not technically part of the Downtown neighborhood.

New homeowners are attracted to the fast-paced vibe of the city, and although over 90% of residents are renters in this neighborhood, there are still homes available in downtown. Homes almost single-handedly consist of high-rise lofts and condos and can be pretty pricey, but it’s a great area to invest in.

Goose Hollow is one of the original Portland neighborhoods and is located in northwest Portland, but is often considered downtown Portland because it borders downtown. This urban neighborhood is one of the most desirable areas in Portland and attracts young professionals and singles who enjoy being close to downtown as well as families and retirees who enjoy the recreational areas of the west hills. Overall this is a gorgeous neighborhood that anyone would love to live in or around. Goose Hollow got its name from a late nineteenth century pond that used to be in the neighborhood where lots of wild geese would reside, although the pond is no longer here, the name is a constant reminder of the neighborhoods history.

Goose Hollow has a mix of residential and commercial properties within the neighborhood, and residents support the many locally owned shops, cafes, and restaurants. There is also a mix of newly constructed buildings as well as restored buildings and homes, which add to the unique charm of the neighborhood.

Bordering the Goose Hollow neighborhood is Washington Park and Arlington Heights to the west, Hillside and Northwest District to the north, Downtown Portland to the east, and Southwest Hills to the south.

Washington Park and the hills of Goose Hollow that lead up the the park offer some of the best views in Portland, and Goose Hollow residents enjoy living within blocks of Washington Park and all it has to offer, including the International Rose Tea Gardens, Oregon Zoo, Hoyt Arboretum, World Forestry Center, and the Japanese Gardens. There are also tons of paved and unpaved hiking trails, fountains, picnic tables, a gift shop, playground, soccer field, stage, public art, tennis court, vista points, and much more.

The MAX Light Rail comes right through the neighborhood and offers an easy commute for residents to downtown Portland, or all the way out to Beaverton or Hillsboro. Although there aren’t a lot of families in the Goose Hollow neighborhood, area schools consist of Cathedral Elementary School, East Sylvan Middle School, and Lincoln High School.

There are many historic style homes in the neighborhood as well as modern new construction, condos, townhouses, and apartment style living. There are many Victorian, Edwardian, older bungalow, and craftsman style homes. Only about 14% of residents in Goose Hollow are homeowners, which is partly due to the high number of Portland State University students who live in the neighborhood, but this is a great neighborhood to invest in, especially as a new homeowner.

The Northwest District neighborhood is an urban, trendy, and hip neighborhood located in northwest Portland, and is home to a few highly desirable pocket neighborhoods such as Nob Hill, Pearl District, and Uptown. This is a densely populated neighborhood with over 11,450 residents spanning across 849 acres.

The Northwest District has a mixture of both residential and commercial areas, and all residents are within walking distance of a plethora of dinning, shopping, parks, coffee shops, spas, salons, entertainment, pubs, nightlife, and much more. This is a great neighborhood for anyone who loves living the city life and being in the middle of all the action. The eastern area of the Northwest District neighborhood is referred to as the Historic Alphabet district due to the streets between NW 21st and 23rd Avenue that are in alphabetical order, making it easier to find your way around the neighborhood.

Bordering the Northwest District are Northwest Industrial to the north, Hillside and Forest Park to the west, Arlington Heights and Goose Hollow to the south, and Downtown, Old Town Chinatown, and Pearl District to the east. Downtown Portland is within blocks which makes an easy commute, and the 405 freeway runs along the eastern border of the neighborhood as well. Due to the neighborhoods close proximity to downtown Portland it boasts some of the best public transportation options available.

Although this is a family friendly neighborhood it is mostly populated with singles and urbanites as opposed to families, however, roughly 4% of residents are families with children. These residents send their children to the following schools: Chapman Elementary School, West Sylvan Middle School, and Lincoln High School.

Homes in the Northwest District consist of many gorgeously restored older homes, expansive estates, as well as high end condos and lofts. Styles include Victorian, craftsman, old Portland, bungalow, Queen Anne, Tudor, Cape Cod, cottages, and many others. Home prices tend to be a little pricey as you’re paying for the neighborhoods great location.

Bordered by Old Town Chinatown and Downtown to the south, to the east is also Old Town Chinatown and across the Willamette River are Kerns and Lloyd District to the east as well, Northwest District and Hillside to the west, and Northwest Industrial to the north. The 405 freeway runs along the western border of the neighborhood and the Willamette River makes up the northeastern border of the Pearl District neighborhood.

There is a very small percentage of families in the Pearl District that have children, only 1.3%, so it’s no surprise that there aren’t any public schools in the neighborhood. The few families that have children send them to nearby schools, and these schools consist of Chapman Elementary School, West Sylvan Middle School, and Lincoln High School.

The Pearl District is an urban, densely populated neighborhood, but true to Portland style there are still some parks in and around the neighborhood. These parks include Jamison Square Park, Tanner Spring Park, Couch Park, Waterfront City Park, O’Bryant Square Park, and the North Blocks Park. In addition to all the picnic tables, playgrounds, paths, basketball courts, off leash dog areas, and hiking trails, the Waterfront City Park also has a boat dock and gorgeous views of the Willamette River.

Homes in the neighborhood almost single-handedly consist of lofts, condos, and townhouses. Due to the tight quarters and mere 300 acres the neighborhood spans, there are mostly older industrial buildings that have been converted into housing, as well as newly constructed high-rises to choose from. The neighborhood continues to grow and expand, and housing costs are much higher than many other neighborhoods. 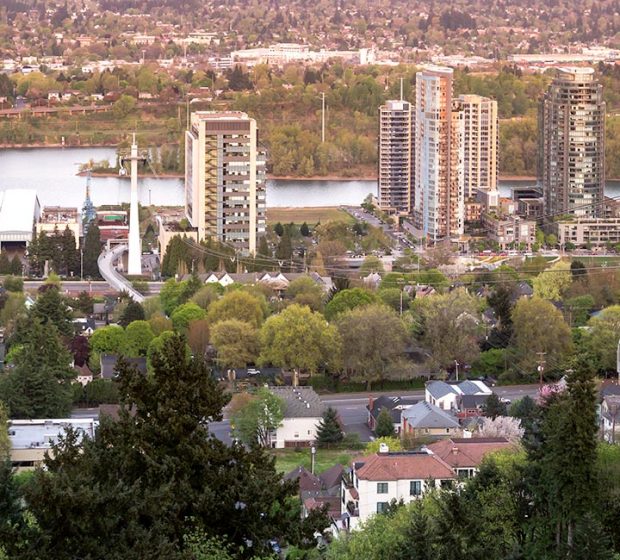 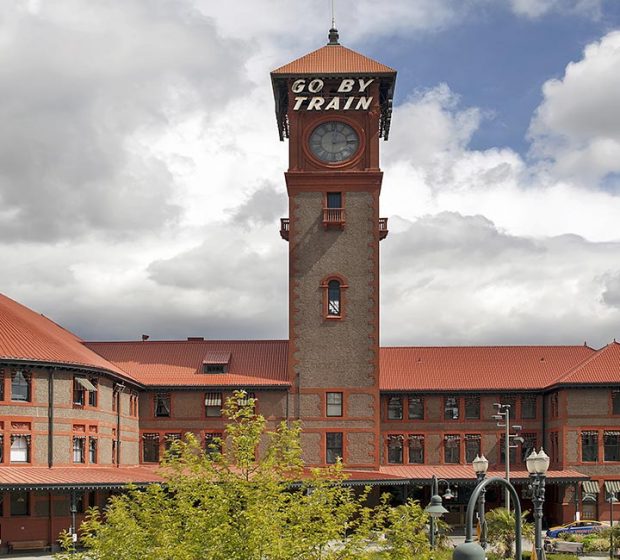 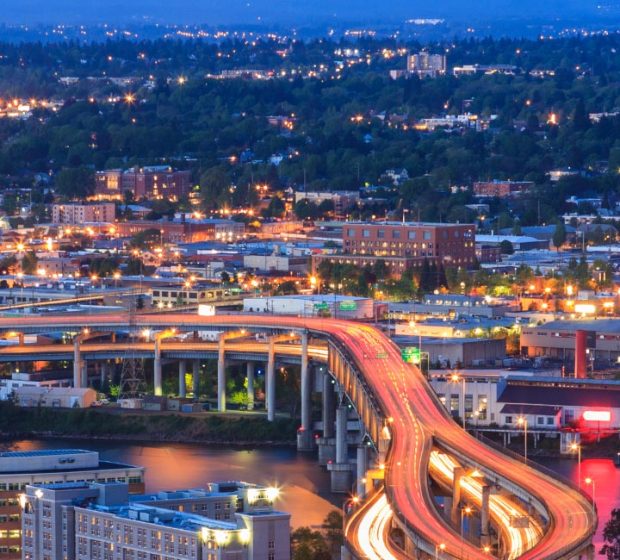 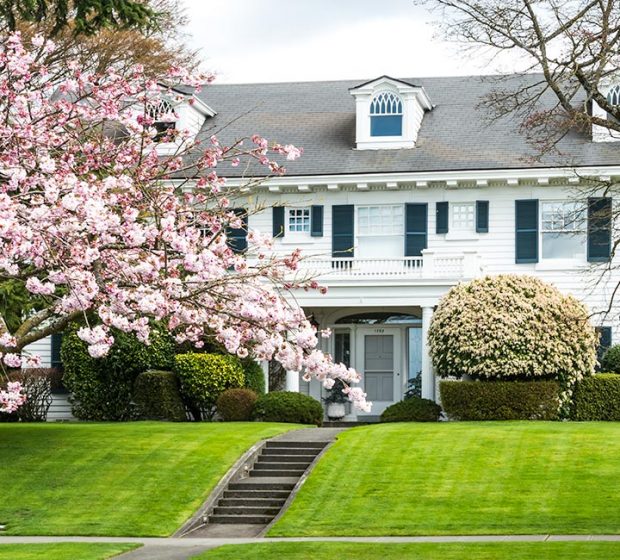